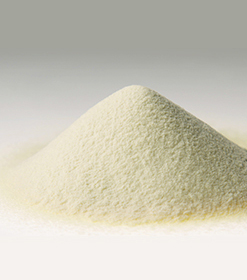 Glucosyl hesperidin contains a glucose molecule enzymatically bound to hesperidin, which is a polyphenol derived from citrus fruits. This unique structure increases water solubility by more than 100,000 times and makes it more easily absorbed into the body, which dramatically widens its food applications.
Although the patent application for the manufacturing/use of glucosyl hesperidin was not filed until 1989, Hayashibara’s technical development in enzymatic glycosyl transfer technology goes back to 1969-1970.
Many of Hayashibara’s most innovative products have been developed using this ingenious enzymatic glycosyl transfer technology, which has literally sculpted the history of Hayashibara. This story is about the background and development history of this groundbreaking technology.

"Glycosylation technology" triggered by the development of maltose applications 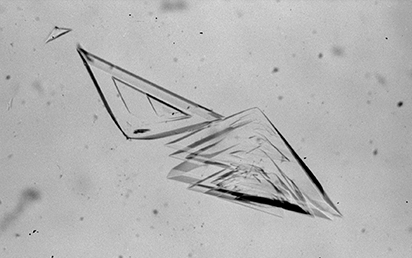 Founded in 1883 as a starch syrup manufacturer, Hayashibara succeeded in the large-scale manufacturing of glucose by enzyme saccharification in 1959. Later, in 1968, the company developed the world's first technology to manufacture high-purity maltose from starch by an enzyme saccharification process.
Discovery of “optimal applications” to take advantage of maltose mass production by Hayashibara’s new technology became an important priority of the company.
In 1969, Mr. Toshio Miyake, a researcher who had been working for Hayashibara for four years was assigned to work with the Institute for Agricultural Biological Sciences (currently, Institute of Plant Science and Resources), Okayama University in Kurashiki City to develop such applications with maltose.

The three main application development goals for maltose were: 1) Further purification techniques for intravenous injection applications; 2) Reduction of maltose to maltitol for use as a low-calorie sweetener; and 3) Maltose itself to be used as a low-sweetness sweetener. After the three main goals, there was another goal that focused on the molecular structure of maltose. This 4th application development goal resulted in major product development opportunities for Hayashibara.
Maltose has a structure in which two glucose molecules are bound. This bond contains binding energy. Conversely, a single unit of glucose has no such binding energy. This means it is theoretically possible to bind one glucose molecule from the maltose molecule to a different substance using the binding energy and a tranglycosylation enzyme. This would release the other glucose as a free molecule, whereas it is not possible currently to do this with a single glucose molecule. Based on this approach, research on innovative glycosylation technology was introduced using maltose as a glucose donor to other substances as receptors.

Success in Complementing Shortcomings of Vitamins

First, Mr. Miyake started an experiment to bind glucose to vitamin B2. Vitamin B2 was selected as a receptor because domestic and foreign researchers had already demonstrated the ease of binding it to glucose. Vitamin B2 has disadvantages, such as low solubility in water, strong bitter taste, and low photostability. However, it was found that when a glucose molecule is bound to vitamin B2 the resulting substance becomes soluble in water, has a 90% reduction in bitter taste, photostability increases, but retains its biological activity.
This result lead to the strong assumption that physiochemical shortcomings of various substances can be improved by binding glucose to them. When the result was reported to the company President, a new question arose, "Is it possible to similarly stabilize unstable vitamin C by binding glucose?" After a series of research experiments, Hayashibara succeeded in the synthesis of glycosylated vitamin C*1 around 1970. 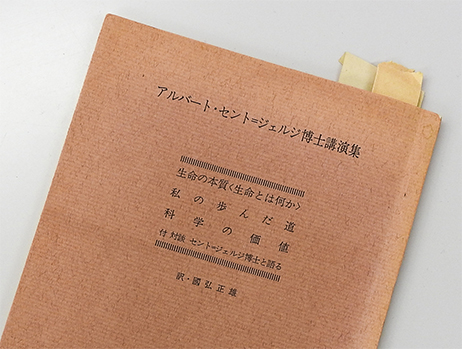 List of Dr. Szent-Györgyi’s lectures which triggered the research

One book triggered focus on hesperidin 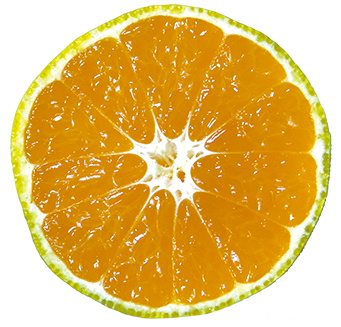 Hesperidin is contained abundantly in peels and membranes of citrus fruits, primarily oranges.

Vitamin P is a flavonoid compound contained in citrus peels and flowers of Styphnolobium japonicum (Japanese pagoda tree). Vitamin P is a collective term for hesperidin, naringin, and rutin. Among them, hesperidin is identified as an active ingredient in Chinese herbal medicine. However, it has the shortcoming of very low water solubility. Hesperidin could have a wide range of applications in foods and other applications if it was soluble in water.
The low solubility of hesperidin was a developmental obstacle, making it difficult to react with enzymes, which are water soluble. Because optimizing the reaction conditions was challenging, many cycles of trial and error occurred before a solution was found. In 1988, after more than a decade from the original idea, Hayashibara succeeded in binding glucose to hesperidin by using enzymatic glycosylation technology.

Awarded the "Incentive Award of the Secretary of Small and Medium Enterprise Agency" of the Chugoku District.

The decisive factor was that an enzyme called thermophilic CGTase (cyclomaltodextrin glucanotransferase), which was fortuitously under development within the company, was used with dextrin instead of maltose as the glucose donor because dextrin has even greater binding energy.
Using thermophilic CGTase, the combination of glucose and hesperidin (Glucocyl hesperidin) becomes about 100,000 times more than soluble than hesperidin, expanding the applications to utilize its functions for multiple purposes. In 1989, manufacturing and application patents for glucosyl hesperidin were approved.
Meanwhile, the research on the function of glucosyl hesperidin was handed over to another researcher, Dr. Hitoshi Mitsuzumi. First, he started with reading research papers and investigating the physiological functions of hesperidin. Functionality of hesperidin had not been extensively studied because of its insolublity in water. However, Dr. Mitsuzumi did find some articles on hesperidin strengthening capillaries, and neutralizing oxygen species. He decided to collect data validating that Glycosyl hesperidin had the same functions.*3. 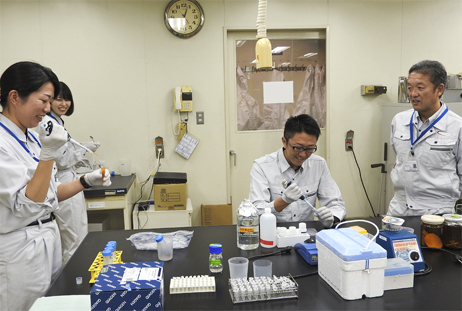 Research on glucosyl hesperidin is carried on by the next generations (far right: Dr. Mitsuzumi).

In the 2000s, public health awareness increased as metabolic syndrome screening became mandatory in Japan for the workforce. In the food industry, a movement to obtain a certificate for food for specified health use (FOSHU) increased. At that time, a new opportunity presented itself for glucosyl hesperidin. Expected functional benefits were not easily confirmed in previous experiments, but remarkable results were obtained for lowering serum triglyceride levels. Around 2002, governmental grants for research were offered to obtain data in human studies.
As a result, Hayashibara discovered that ingestion of glucosyl hesperidin reduced mean serum triglycerides by about 30% in subjects with high triglycerides, and also confirmed that glucosyl hesperidin inhibits the formation of small dense LDL-cholesterol that can cause arterial sclerosis.
In addition, research using animals and hepatocytes glucosyl hesperidin inhibited the synthesis of triglycerides while promoting β-oxidation of fatty acids in the liver.
After these results were published and presented at academic conferences, glucosyl hesperidin attracted great attention, and several pharmaceutical and beverage manufacturers announced development of FOSHU products featuring glucosyl hesperidin as a functional ingredient. Product development quickly followed.
Due to its novel mechanism of action for FOSHU approved ingredients, i.e., bio-activity in the liver, there were delays in the product development using glucosyl hesperidin. Nevertheless, three products were approved as FOSHU and launched in 2012, this was seven years from the publications and academic conferences. 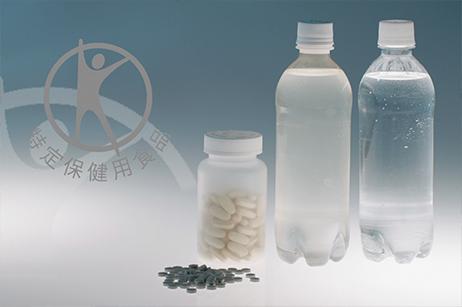 Contained in Food for Specified Health Uses and Food with Function Claims.