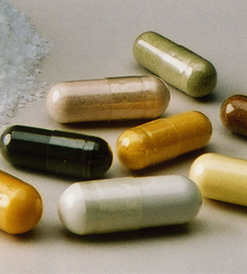 PULLULAN, an "edible” and "non-polluting” plastic, was highly anticipated during the initial developmental phase, however, it took 30 years to develop the high demand for the product that there is today. Currently, PULLULAN is used in a wide range of products because of its high adhesive and viscosity modifying properties, and can be processed into films and capsules.
PULLULAN is a unique product of Hayashibara because it is produced by microbial fermentation, whereas the majority of Hayashibara’s products are produced by the company’s primary expertise, by enzymatic reactions with starch. This is the story about the development of PULLULAN from the initial concept to the present. 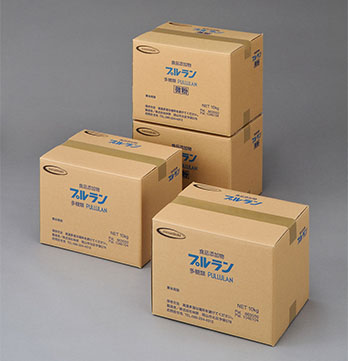 PULLULAN is a white water-soluble powder that has little flavor or odor. A filamentous fungus, Aureobasidium pullulans, produces PULLULAN by fermenting common starch syrup. It is water soluble, highly stable, has lubricating, adhesive, solidifying, adherent, cohesive, coating, and molding properties.
In addition to its safety as a food ingredient, it is decomposed by microorganisms in nature and generates no toxic gas when burned. It is a unique material that can be used in a wide range of fields since PULLULAN has very little impact on the environment as compared to standard plastics. 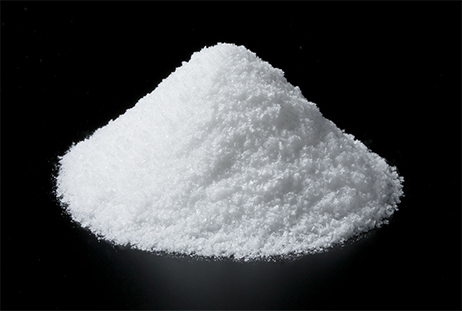 A discovery started with a "membrane" formed in a research beaker

The birth of PULLULAN goes back to the late 1960s when researchers in the R&D department were researching mass production of maltose. PULLULAN was originally used as a reagent to measure the specific activity of debranching enzymes. Enzymatic reactions with starch can be efficiently assayed using PULLULAN due to its consistent molecular structure.
One day, by chance, a beaker containing the PULLULAN solution was left uncleaned overnight. A film-like membrane was formed on the inside of the beaker the following day. The staff members were very excited by this accidental discovery that "A plastic like-substance can be created from starch." 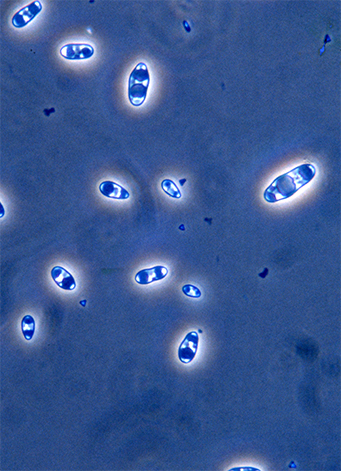 Development of a PULLULAN mass production process began in earnest in 1972.
The two most important issues that need to be considered when developing a commercial scale product are, yield, and product quality. Three researchers in the R&D department teamed up to launch a project to achieve this goal.
The first step was to find a “colorless” microbe that efficiently produces PULLULAN. The known filamentous fungus, also termed a "black yeast", that produced PULLULAN is literally black because of a pigment produced by the organism．Use of such a black yeast would require large-scale costly bleaching equipment during the manufacturing process. Therefore, it was essential that a strain of the fungus be found or developed that has no color.
Tens of thousands of organisms were screened before a pullulan-producing fungal strain was found that produced very low amounts of pigment. Further, various growth culture media were tested. As a result, a starch syrup made from corn was identified to achieve a high yield of 70%. Finally the mass production method was successfully developed.

Fermentation plant and equipment needed to be
built from scratch

Because of the unique fermentation process, the plant to produce PULLULAN needed to be custom built. Additionally all the necessary production equipment had to be customized to this particular process. Even though the production method had been developed, scale-up of pilot production to industrial volumes with new equipment was a very laborious process. Changes to one part of the process can result in recalibration of other parts in order to construct an optimally efficient PULLULAN production facility.
While different types of fermenters, degerming equipment, concentrator, and drying methods were studied. The most challenging task was to calibrate the concentrator. Due to its increased viscosity during concentration, a pullulan solution becomes lumpy in the tank and loses its flowability. Conversely, if the flowability is optimum, the concentration process becomes less efficient.
Relentless trials were conducted involving the concentrator. Both Hayashibara and the concentrator manufacturer were busy trying to optimizing this step.
Finally, the concentration process was successfully calibrated for mass production. The PULLULAN plant was completed in 1976 despite all the challenges. This accomplishment enabled Hayashibara to produce approximately 200 metric tons of PULLULAN per year.

Significant leap by cooperating with an overseas manufacturer 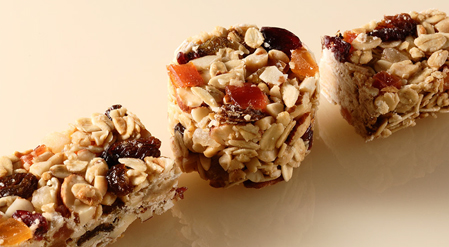 The completion of the new fermentation plant and the subsequent product release attracted great attention like its successful development did in 1973; however, the sales did not meet the original expectations. This was partly due to the worldwide energy crisis of the 1970s.
Hayashibara continued to put efforts into application development by working with external companies and research institutes. In addition, Hayashibara’s salesforce continually promoted PULLULAN to old and new customers. Nevertheless the successful food applications were limited to uses as a binder, glaze for processed marine products, and thickener for dressings and sauces.
The turning point came in 1993 when PULLULAN was displayed at the IFT Food Expo in the United States. One booth staff member, who at the time was working with a Japanese manufacturer of an edible film confectionery made from PULLULAN, was committed to explaining the characteristics of PULLULAN while distributing edible film confectionery samples. His sales effort generated a strong lead from a pharmaceutical/food company and resulted in an exclusive supply agreement for use of PULLULAN in a mouth refreshing film application in 1997.
Later in 2000, a major US pharmaceutical company acquired the company and decided to distribute a pocket-sized mouth refreshing film under the company’s brand name. The product was launched in Canada in 2000 and in the United States the following year. The mouth refreshing film became a big hit reaching annual sales of more than several billion yen. After about 30 years since its original development, PULLULAN finally gained international recognition and demand just before the new century. 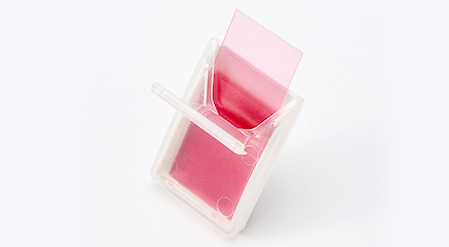 In addition to its unique properties, PULLULAN gained even more attention, because of the issue of BSE (bovine spongiform encephalopathy) during this same period. The use of bovine-derived gelatin was avoided, whereas plant-derived PULLULAN attracted attention as a safe alternative.
Hayashibara started the joint development of hard PULLULAN capsules with a capsule manufacturer affiliated with the same major pharmaceutical company that launched the mouth refreshing film. In 2002, the capsules were successfully commercialized in Japan.
With this big success of the mouth refreshing film and hard capsules, Hayashibara invested in the expansion of their production facilities that increased its production capacity.
Even when the sales volume was low, Hayashibara was producing PULLULAN to maintain the stable demand due to its unique characteristics compared to other products. After 30 years, Hayashibara was rewarded with a great opportunity, and PULLULAN has become one of Hayashibara’s main products.
Hayashibara believes that PULLULAN can still generate additional new applications in a wider range of areas due to its unique characteristics. Hayashibara continues to explore new and exciting uses of PULLULAN.